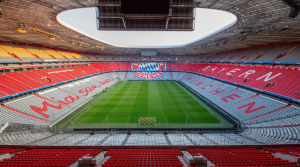 The sample itinerary below solely includes the first day of the Tour.

Bayern Munich is the most successful soccer club in Germany and the one that has won the Bundesliga the most times.

Two significant sports centers stand out in the city: the Olympic Park, a three km² sports complex built for the Summer Olympic Games in 1972 and the Allianz Arena, an ultra-modern stadium built for the 2006 World Cup. It is also the stadium of TSV 1860 München which currently plays in the Bundesliga.

The motto of the city is München mag Dich (Munich likes you). Before 2006 it was Weltstadt mit Herz (Cosmopolitan City with Heart). His name, München, derives from Munichen, from the Old High German, meaning “in the place of the monks.” The Benedictine monks who founded the city choose the name; hence, there is a monk in the shield of the town. The official colors of the city are black and gold, colors of the Sacrum Germanic Roman Empire, from the time of Louis IV of Bavaria.

The metropolitan area of ​​Munich includes some adjoining localities of this city. According to a 2009 study, Munich is the city with the best quality of life in Germany.

The modern Munich is a financial and publishing center. In terms of social and economic innovation, the city is in the 15th place among towns according to a 2010 study and is the fifth German city for the 2thinknow Innovation Cities Index based on an analysis of indicators.